Your #1 source for everything Allison Williams

Welcome to Allison Williams Web, your online resource dedicated to the talented actress Allison Williams. You may know Allison from her roles in "Girls", "Get Out" and more. It is our aim to bring you all the latest news, photos, information and much more on Allison's career. We hope you enjoy your stay!

Before Allison Williams became known as TV’s cringiest hipster you love to hate, Marnie Michaels on Girls; or the most spine-chilling on-screen sociopath of 2017, Rose in Get Out; or the quasi-homicidal Charlotte in Netflix’s brand-new psychological thriller The Perfection, she was just a smiley-faced kid who loved to perform. “I was definitely a ham when I was younger,” Williams tells me as a server in crisp linens refills our iced teas at the Sunset Tower in West Hollywood, California. “Everyone around me was like, ‘Yep, that’s an actress. We are screwed.’”

That enthusiastic little kid, rather than the painfully self-serious Marnie (and certainly Williams’s other deranged characters), feels very present today, especially as Williams places her lunch order: a plate of gluten-free avocado toast topped with childlike slices of melted cheddar cheese. “Gluten-free because I’m an actress in Los Angeles, but I love dairy. Dairy keeps me alive,” Williams says with a heaping spoonful of the self-awareness her infamous Girls character sorely lacked.

Williams never aspired to play evil, and as she sits before me in a humble gray Uniqlo sweater, skinny jeans, and flats (her self-proclaimed uniform), all accessorized by a genuine and charismatic smile, it’s easy to forget that her infamous on-screen presences have earned her media headlines like “scary,” “the most terrifying villain,” and, quite simply, “the worst.”

“I swear to god it just was a sequence of scripts that were interesting to me,” Williams answers when I ask if playing the Ursulas rather than the Ariels of the world was a conscious career decision. Though she promises it wasn’t, it’s no coincidence that the most interesting female characters that crossed Williams’s desk were also the least nice. “I think the pressure to play someone likable is definitely gendered,” she comments, adding that one of the most common questions journalists posed during peak Girls hype was why none of the characters were more likable. “And then we were like, excuse me, Walter White? Marnie never killed anyone,” Williams says with a laugh. “I mean, is anyone you know likable 100% of the time? That would be the most boring character ever. So I’m definitely drawn to the polar opposite of that.”

The trajectory of every actor’s career is somewhat shaped by their first big gig: For Allison Williams, this was her first job out of college. Williams was 22 and a fresh alum of the Yale English department when big-time producer Judd Apatow stumbled upon a (now-famous) YouTube video of her singing the Mad Men theme song. Williams originally made and uploaded the video, crossing her fingers it might help her book a gig one day. She didn’t expect it to happen so soon—only 11 days after relocating to Los Angeles to start her career, Apatow cast her in Girls and flew her back east. It was the break of a lifetime; but as soon as Girls hit the air, strangers couldn’t help but associate Williams with her uptight character. “It feels kind of meta,” she says. “Actresses used to be able to live their lives privately, to disappear, and then show up transformed on screen. That is not a reality anymore.” So when it came time to select her next projects, Get Out and now The Perfection, Williams actively wanted to screw with audiences’ expectations. “Get Out was all about using people’s assumptions of me against them. As a weapon,” she says with a grin. “Like, fuck you guys for pigeonholing me. That made picking the next role really fun, too.” 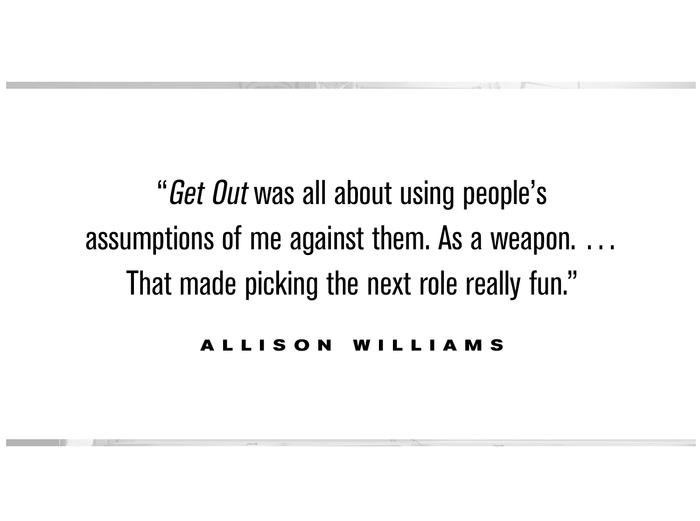 Williams owes much of her fearlessness when choosing roles and performing to the many awkward sexual encounters, squirmy musical performances, and makeup-free scenes she was asked to do for Girls. “I was young and self-conscious when I got that job,” she says. “I didn’t know it would require so much sex. But by the end, I was totally desensitized to all that, and it really freed me up.” As proof, Williams tells me she just watched The Perfection, in which there too many sordid scenes to count (spoiler: one of them suggests sexual assault by way of an amputated limb), with her middle-aged parents.

The diverse interests Williams cultivated in college (which her parents, journalism bigwigs Brian and Jane Williams, forced her to attend before heading to Hollywood) have also helped her career feel lower-stakes. That’s made taking risks feel easier. Williams acknowledges that the immense privilege she’s been awarded in life has had undeniably positive effects on her self-worth. “Thanks to the circumstances under which I grew up, I had a ton of breathing space to fill in my life and become interested in other things,” she explains. “I feel so fortunate because my identity doesn’t come from my career.”

Williams has a few other tangible techniques for handling the undue flack she sometimes receives from audiences who can’t help but associate her with the villains she plays—and the general stress of a career in volatile Hollywood. Massages, for one, and a collection of cozy pajamas (Rails and Gap are her favorites) that she’ll let herself stay in for 24 hours straight on a rare day off. “Bad at sleeping but good at pajamas,” she smiles.

And, most importantly, for years, Williams has dedicated her time to a handful of charities—mainly Horizons National, an education nonprofit for low-income families, and (Red), an organization aimed at raising awareness and funds to eliminate AIDS in Africa. This is the work Williams talks about most passionately. “It just fills my life in and helps keep everything in perspective,” she explains. “I have a weird job where you are spending all your time all the way up your own ass and thinking that the world revolves around you. Nothing helps balance your life out more than spending your time around people who are in totally different circumstances and asking yourself, how can I be of service?” 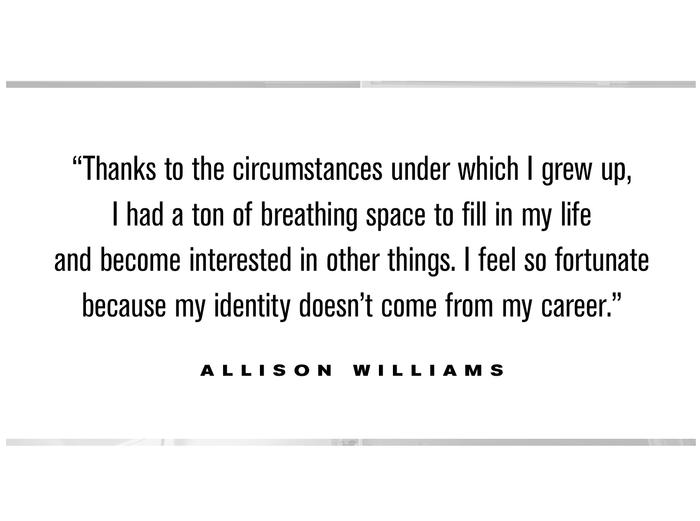 It’s around the kids she works with at Horizons that Williams feels like her most authentic self—when the expectations to be this poised, gluten-free, profoundly “unlikable” cinema star melt away and that ham of a child reappears. “Why do you think I played Peter Pan?” Williams says with a twinkle in her eye, referencing the lead role she played in NBC’s live televised version of the classic musical five years ago. “It’s an excellent excuse to be a little kid. Because it’s your job. What’s better than that?”